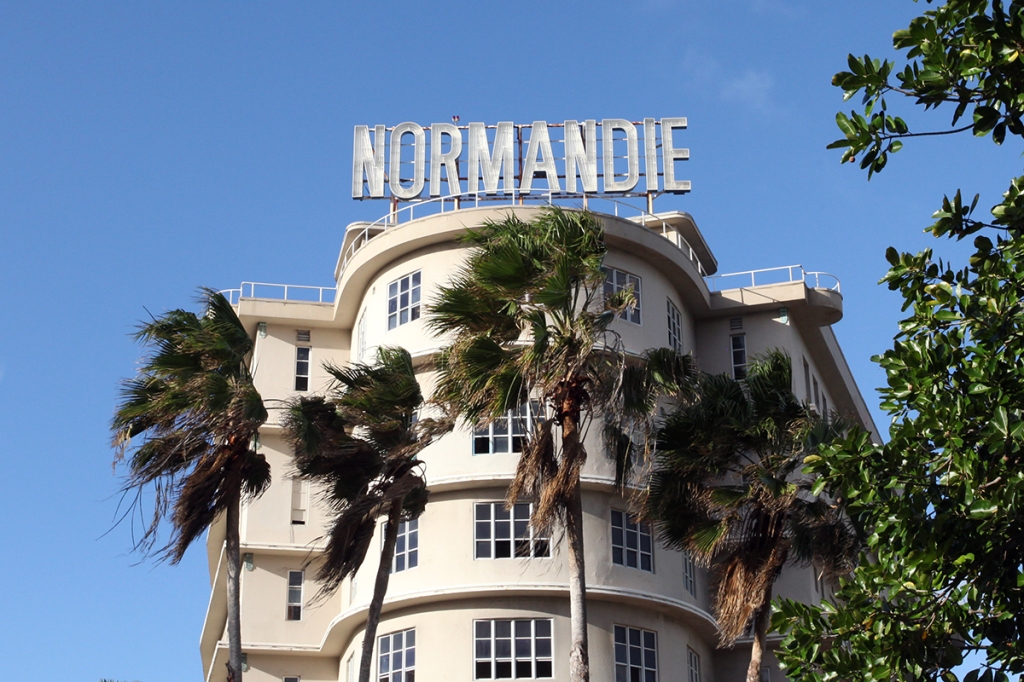 With its amazing architecture and fascinating history the Normandie Hotel in San Juan, Puerto Rico may very soon open its  doors.

The Normandie Hotel is a hotel located in San Juan, Puerto Rico. The hotel originally opened on October 10, 1942. Its design was inspired by the ocean liner SS Normandie. It features the same art deco design as the ship that inspired it, and the hotel’s roof sign is one of the two signs that adorned the top deck of the Normandie but were removed from it during an early refitting. It is a fine example of what came to be known as the Streamline Moderne architecture style.

The Normandie Hotel was the brainchild of Puerto Rican engineer Félix Benítez Rexach. The engineer met his future wife while on a trip aboard the SS Normandie. As a tribute to his French wife, Moineau, Benítez decided to construct a structure that imitated the lavish settings of the ocean liner. Designed by architect Raúl Reichard (1908–1996), the hotel began construction in 1938. The hotel’s exterior was designed to resemble a luxury liner, elongated and curved in front, with portal-shape windows and lights. Inside, the hotel features art deco design, complete with Roman, Egyptian, and French details, high ceilings, and corridors looking down into a central skylighted atrium.

Designers and artists from Puerto Rico, Dominican Republic, France, and Spain all contributed to the hotel’s overall construction. When it opened on October 10, 1942, it became an instant sensation among the island’s social elite. Completed at a cost of more than US$2,000,000, the hotel catered to many major Hollywood and Latin American film stars such as Cantinflas, Libertad Lamarque andJorge Negrete. The hotel also served as a performing arts venue for many of Puerto Rico’s top entertainers such as Ruth Fernández,Myrta Silva, Sylvia Rexach, and Carmen Delia Dipini.

After being closed and abandoned in the 1960s, the hotel was restored in the early 1990s after it underwent massive renovations due to heavy damage caused by Hurricane Georges in 1998. After storm-related damages were repaired, the hotel remained in business until 2004, when a renovation project commenced. In early 2005, the 173-room hotel reopened after its refurbishing, however it was closed once again sometime after 2008 due to an ongoing modernization project.

Most recently, the Normandie Hotel was purchased on August 8, 2013 by Ben Medetsky and Jack Polatsek of Interra Capital Grouphttp://www.interracapital.com, who are working on plans for redevelopment of the hotel.

The Normandie Hotel has been declared a national historic site and  was added to the National Register of Historic Places by the U.S.Interior Department’s Heritage Conservation and Recreation Service on August 29, 1980.

Spanish hotel chain Sol Melia is close to signing agreements to manage two additional hotels in Puerto Rico, where it already operates a luxury property on the outskirts of San Juan, Secretary of Economic Development and Commerce Alberto Baco said.

“Sol Melia will soon manage two additional properties,” Baco said during a meeting with potential investors from Latin America and Spain, adding that the 4-star Gran Melia Puerto Rico in Coco Beach “has been a huge success.”

Baco did not say which properties were under consideration, but sources close to the talks told Efe that one was the iconic seaside Hotel Normandie by the entrance to Old San Juan.

San Juan Mayor Carmen Yulin Cruz told Efe recently that the building would need remodeling, including an underground parking garage, to reopen, with a new landscaping plan needed to let pedestrians enjoy the ocean views in an area much visited by tourists.

The sources told Efe that another piece of real estate considered for the Sol Melia venture was the abandoned Hotel Intercontinental in the southern coastal city of Ponce.