The Spring, Summer collection was design fused with art, almost minimalist. Amongst the extensive display of new couture were nicely tailored suits,  presented on a surreal themed runway.  “Only the inevitable theatricality of my life interests me.” said painter Leonor Fini.

Maria Grazia Chiuri was inspired by the painter who wore Dior in her lifetime.

Above all,  the charisma of the artist defined this collection’s strict yet radical attitude. 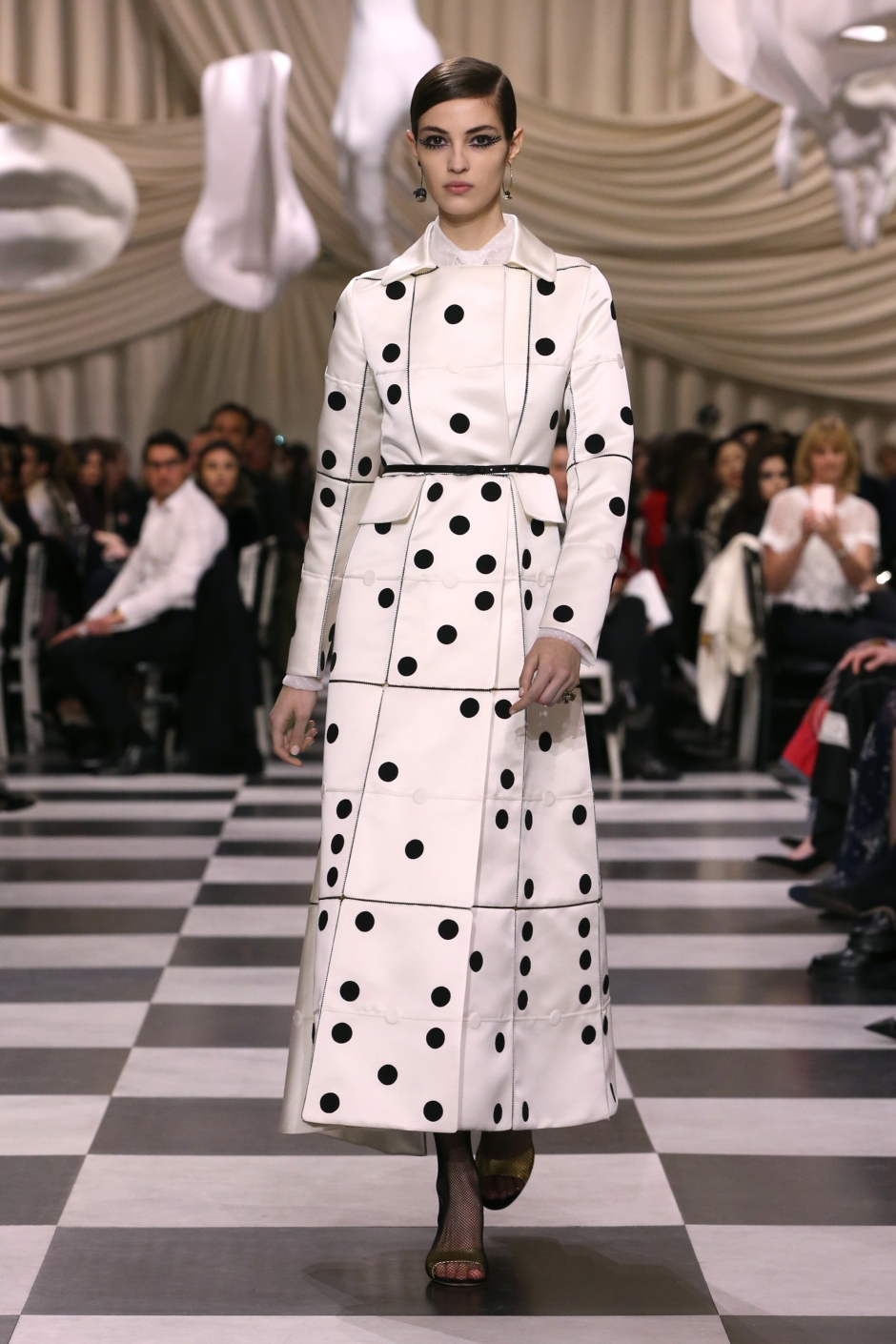 Fini, who left Italy for Paris in the Thirties, held her first exhibition in Christian Dior’s gallery and befriended the designer from that moment onward.

Filled with suits, dresses, and coats which were using as a premise the history of haute couture and its intimate link with the history of modern art this latest selection by Chiuri came together.

The couturier is considered an artist unto himself and the word “atelier” designates equally the studio of an artist or that of a designer.

But any artist’s true “studio” is his or her spirit. It’s in this dimension, located somewhere between dream and reality, or imagination and realization, that  Chiuri, the Artistic Director of the House’s women’s collections, pursues her research and explorations. Because haute couture is a dream of fashion.

It’s a place where there are no limits to pushing boundaries and experimenting with technique, material and form. Immersing herself in the heart of the Surrealist movement made it possible to bring a fresh breath of imagination to the spring-summer 2018 haute couture collection, conjuring an otherworldliness and constant optical illusion.

Surrealism also applies to the evocative words and phrases that guided Maria Grazia Chiuri in creating a collection predominantly in black in white sprinkled with illusion and surprise.

Never trust a first impression… In that spirit, generous pleats on a white evening dress are etched in black like the pages of a book, while caging, a recurring motif in Surrealist works, is transformed into a black mesh fabric that hugs the body and underscores transparency as silvery fishnet mingles with the density of velvet.

Leonor Fini was the incarnation of the then-revolutionary idea that one must always remain independent and reinvent oneself as a representation of all possible realities.

She used clothing to define herself and set her own stage, in public as in private: at once influential, severe and elegant, she struck poses inspired by portraits of men from the Renaissance, by the constant interaction of art and life, and the blend of the natural and artificial. These marvels of haute couture came into being in a dimension suspended between dream and reality.

The same applies to the daywear for which Christian Dior had such a knack, and notably to shapes reinterpreted using traditional men’s wear fabrics. Maria Grazia Chiuri draws on these as inspiration in a series of suits that recalibrates Dior’s curves to today’s tastes, paired with skirts of multiple contrasts.

Ever faithful to the Surrealist tradition of deconstructed forms, accessories make their presence felt in a whimsical way: a fishnet stocking veils a sandal, while gloves clutch an ankle. It’s this way of seeing and being seen, with a point of view that draws on the unconscious and today’s world, that Maria Grazia Chiuri uses as a foil for embroideries and other embellishments. On a dress illuminated by a mirage of peacock feathers, precious and delicate ornaments become eyes that behold and express mystery — as well as the spiritual power of today’s women.