An homage to Dior heritage and the House’s precious links with Venice.
Reconnecting with the House’s unique heritage, its passion for art and lavish balls – Dior celebrates, together with the Venetian Heritage foundation – for its 20th anniversary – the “Tiepolo Ball” in the heart of the legendary Palazzo Labia on May 11th. Timed with the opening of the Venice Biennale, as a fundraiser for the restoration and promotion of Venice’s cultural heritage*, this charity gala revives a form of celebration the House holds dear: the sumptuous spirit of fancy dress balls, in particular the iconic “Ball of the Century” dreamed up by Charles de Beistegui in this legendary palazzo in 1951. For the House of Dior, Venice is inextricably linked to the iconic “Ball of the Century” , hosted at the Palazzo Labia on September 3rd, 1951, by Charles de Beistegui, who owned the property at the time.

The passionate aesthete, decorator, and art collector orchestrated the remarkable event perched on high stilts and bewigged, like a procuratore of the Republic of Venice.

Christian Dior attended the ball, as did Salvador Dalí. Together they designed the black and white giants’ costumes that announced, with their choreographed arrival, the opening of the festivities. “This was the most marvelous spectacle that I have ever seen, or will ever see. The splendor of the costumes rivalled the splendid attire of the figures in the Tiepolo frescoes on the walls(…). The magic of a summer’s night in Italy held us in its eternal spell and put us outside time(…). Parties like that are genuine works of art,” the couturier wrote in his autobiography, forever dazzled. 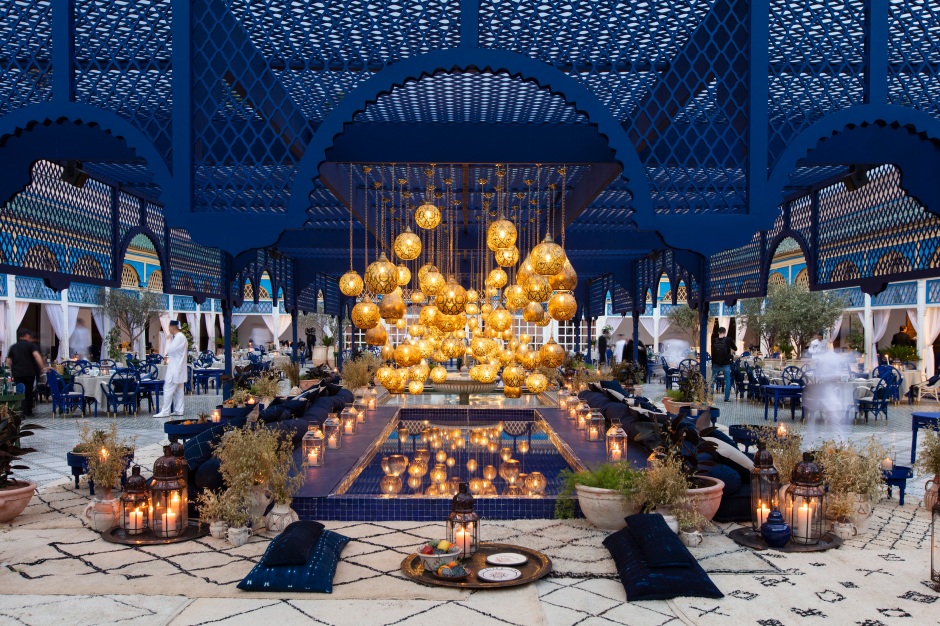 Other key ties to this legendary palace include a dress, a star, and a photograph, all three of which became iconic in their own right. Christian Dior designed a costume for Daisy Fellowes, the icon of high society, magnetic beauty and editor-in-chief of the French edition of Harper’s Bazaar.

This creation would remain forever engraved in collective memory thanks to a photograph taken by Cecil Beaton and published in Vogue. In the photo, Daisy Fellowes faces one of the incredible frescoes celebrating Anthony and Cleopatra, painted by Giambattista Tiepolo to decorate the walls of the Palazzo Labia’s gigantic ballroom.

Through this remarkable ball and the palazzo, the House of Dior renews its ties with the extraordinary golden era of Baroque and the spirit of its avant-garde high society while supporting Venetian Heritage – whose chairman is the architect Peter Marino, a friend of the House – which promotes, in order to better preserve, Venice’s incredible heritage. For its 20th anniversary, this unique association has partnered with the House of Dior. 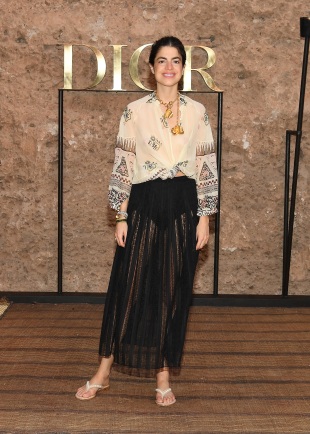 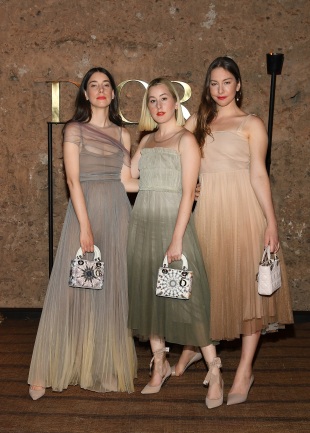 Together, they chose to evoke the “Ball of the Century” , part of Dior’s history and dream, and to dedicate The Bal Tiepolo , An homage to Dior heritage and the House’s precious links with Venice this gala to the Palazzo Labia’s emblematic frescoes by Giambattista Tiepolo. Dubbed the Bal Tiepolo , this ball celebrates Venice, its traditions and its steadfast ties with French culture.

The event’s prestigious collaborators Bevilacqua and Rubelli, both Venetian heritage textile manufacturers, collaborated with the House, notably on fabric research, some of which were sourced from archives dating back to the 19th century, as well as on developing original velvets used in Maria Grazia Chiuri’s haute couture creations. For the occasion, the Artistic Director was inspired by the paintings of the Venetian artist Pietro Longhi and, above all, Dior’s rich legacy of emblematic photos and sketches: Monsieur Dior in his grand cape, René Gruau’s illustrations for the perfumes Miss Dior, Diorissimo , and Diorama , and the Labia dress designed by Yves Saint Laurent for Dior. 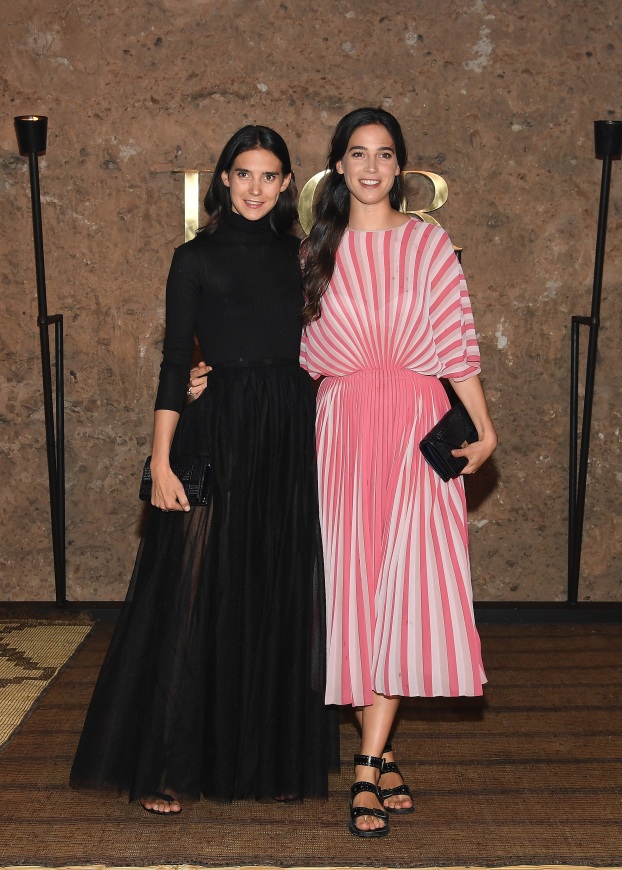 And so it is that ball gowns with capes – created exclusively for a handful of celebrities and friends of the House, including Karlie Kloss, Sienna Miller, and Dasha Zhukova – came to life in these noble fabrics in homage to the original costumes.

The renowned photographer Ellen von Unwerth immortalized the guests in front of the frescoes. The tablecloths at the charity dinner are by Fortuny, the legendary textile brand that upholds the traditions of the fabulous artist, tireless researcher, and artisan-inventor, Mariano Fortuny. These fabrics are from the incomparable collection of the original and contemporary archives of this Venetian institution, still produced today in the original factory on the island of Giudecca established a century ago. Cordelia de Castellane, Artistic Director of Dior Maison, also designed a series of one-of-a-kind plates that depicted the themes of each table. A renewal of the historic friendship between Dior and Venice, in the name of excellence of savoir-faire and carrying on the tradition of Charles de Beistegui’s “Ball of the Century” , the evening was composed of performances such as the magical appearance of the Italian-Croatian artist Parolabianca, who trained under the great mime artist Marcel Marceau. Dancers and stilt walkers created moving tableaux to the strains mellophones, n’gonis (the Malian harp), and violins. This grand spectacle was enhanced by the performers’ luminous costumes conceived by Maria Grazia Chiuri and the Italian artist Pietro Ruffo, with whom she previously collaborated on the House’s 70th anniversary fashion show.

For this exceptional evening, he and the Artistic Director created sculptural reflective dresses called Constellation , representing the night sky and the 12 signs of the zodiac. Together, they were inspired by Greek astronomical symbols The Bal Tiepolo , An homage to Dior heritage and the House’s precious links with Venice depicting richly detailed mythological figures.

This ancestral and magnetic journey across the sky, the sun and the stars is a celebration of Christian Dior’s codes and passions as well as the perpetual regeneration of Venice, an eternal symbol of beauty and festivities. Through this unique event, Venetian Heritage and Dior honored the steadfast ties between France and Italy. Maria Grazia Chiuri demarcates this new connection through her creativity and fascination for art in all its forms, creating an intense multicultural dialogue rooted in a variety of sources. }

*Proceeds from the event will fund the restoration of the monumental staircase designed by the architect Mauro Codussi in the Scuola Grande di San Giovanni Evangelista (a Christian confraternity building dating to the 13th century) and the iconic fresco Castigo dei Serpenti by Giambattista Tiepolo in Venice’s Galleria dell’Accademia.

Venetian Heritage Venetian Heritage is an international non-governmental organization based in Venice and New York. Its chairman is the architect Peter Marino, a friend of the House, and its director is Toto Bergamo Rossi.

This organization encourages an array of cultural projects in Venice, including conservatory efforts, exhibitions, publications, conferences, and research, and helps publicize the city’s artistic heritage. It also sponsors and supports these efforts in the interest of better safeguarding Venice’s incredible heritage. Its major projects include the restoration of the Church of the Jesuits and the Church of San Zaccaria (one of the most beautiful examples of early Venetian Renaissance architecture) and, more recently, the renovation of the magnificent silver and gold-plated Gothic altarpiece of the Church of Salvador.

Palazzo Labia Palazzo Labia was named after a Spanish merchant family that purchased a title of nobility in Venice.

Built from Istrian stone at the end of the 17th century, it is composed of three facades: one opens out onto the Grand Canal, while the other two face the Campo San Geremia and the Rio di Cannaregio. It is famous for its reception rooms and particularly its ballroom, which was built in 1746 by the Italian Baroque architect Giorgio Massari. The interior is also decorated with frescoes by the Venetian painter Giambattista Tiepolo depicting the story of Anthony and Cleopatra. Since 1964, the palazzo has been the regional headquarters for the RAI (a major Italian broadcaster), which has begun renovations to the site. On September 3rd, 1951, Charles de Beistegui hosted the famous “Ball of the Century” here, and it would go down in history. The Spanish-Mexican billionaire organized the ball to celebrate the end of renovations to his Venetian palazzo, which he purchased in 1948.